Michael rushed into his cab that was parked in front of the Block C hostel. He looked at the time on his phone, 30 minutes to get to campus. He was missing out on the party!

The music from the third floor of the main hostel was so loud, deafening, just the way they loved it! It was Friday night on the university campus and this was one of many parties going on.

After paying the money out to the cab driver, he tried to act cool and collected as he flew up the stairs to join the crew. This was his third party of the night, different hostel, and there were two more he needed to attend before the night was over. You only live once, and he planned to enjoy it to the fullest.

He got to the door, no need to say hi, the music was too high! He waved, smiled and kissed some girls hello. His eyes shifted to BigP, an alcoholic drink famed for its aphrodisiac prowess. After all, he had to prove himself when the parties were over; performance was key for a good reputation! 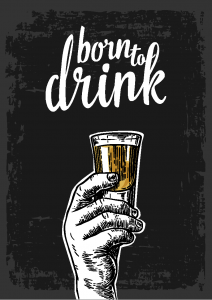 Michael woke up on Sunday afternoon to take a quick shower. He hadn’t scored anyone last night. The night had been long and fun though. He took a glance of himself in the mirror, he looked terrible, what a good night!

His face was dull and swollen, and he attributed it to something he had eaten or maybe an allergic reaction to his new cheap bed sheets. He went about his normal activities, and by mid-afternoon, his face was handsome as usual.

Over the next few days, Michael’s face kept swelling in the morning and it would recede as the day went by. Then he started to feel weak, getting headaches, nausea and vomiting. He decided to take malaria pills, these did not help. He then went to the campus clinic.

Not Malaria, but kidney disease

Preliminary tests were pointing to kidney failure?! Michael was in shock as the doctor explained what was going on. His malarial like symptoms, face swelling and also his history of frequent intake of alcoholic drinks, especially the aphrodisiac ones, could lead to kidney disease.

After hospital, he went to the school church and promised to devote himself to God for the rest of his life if the rest of the tests were good. “Will my medical aid cover  the costs of the dialysis?” He thought to himself.

A week later, Michael found himself with the doctor. He took in a deep breath as the doctor begun to speak. He had to begin dialysis treatment as soon as possible.

The beginning of dialysis signalled kidney failure, which required Michael to consult a dietician who would guide him in modifying his diet if the dialysis was to be effective.

It felt like two problems in one, dialysis and dieting. And yet that binge drinking that caused his problem was so unnecessary! He should have drunk responsibly.

Firstly, he had to restrict his protein, sodium, potassium, phosphorus, and fluid intake. Limiting sodium intake would help avoid the thirst he was feeling, and maintain acceptable fluid balance in his body.

Fluid consumption would be controlled to avoid congestive heart failure, pulmonary edema, hypertension, and swelling of the legs and feet. Protein excesses would need to be avoided as it could lead to the accumulation of nitrogenous waste products in the blood (uremia), because his kidney was malfunctioning.

Kidney failure causes high levels of phosphorus to build up in the blood and disrupts the calcium/phosphorus balance. Potassium restrictions would depend on serum potassium levels, the type of dialysis, medications, and residual renal function.

He also had to increase his calorie intake, apparently he was losing weight.

People with kidney disease have to make drastic changes to their diets, especially by reducing their protein intake.

Kidney disease is associated with our lifestyle choices. Excessive intake of sodium and fat, coupled with high blood pressure triggers it.

Kenyans are especially prone to kidney disease because up to 35% of us have hypertension (elevated high blood pressure), we enjoy our salt, especially on anything choma, and we drink alcohol in higher quantities than we should.

Most of the diseases we suffer from are a result of our lifestyle choices. Eat healthy, use part of your leisure time to exercise, and drink responsibly!

No posts found.
more in Disease