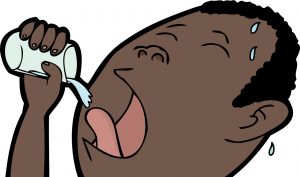 You might know of a person who’s constantly nervous, anxious, irritable and hyperactive. This mood shift could be a reflection of an overstimulated metabolic system.

Some of these negative symptoms can be reduced by acquiring a good diet that can strengthen your immune system and improve the working of the thyroid gland.

The thyroid gland is a butterfly-shaped organ that’s located at the base of your neck. This gland regulates very many processes in your body when it malfunctions, your physical health and mood can be adversely affected.

It produces two major hormones that regulate the speed with which your cells works, also referred to as metabolism. These hormones are triiodothyronine(T3) and thyroxine(T4).

Hyperthyroidism occurs when too many of these hormones (T3 and T4) are released into your body. This person’s body cells start working faster than usual, on overdrive, which increases their metabolic rate beyond what is safe for them.

You might notice some visible symptoms, trembling hands such that when that person holds anything his or her hands shake uncontrollably.

He or she could also be very intolerant to heat and will avoid hot (or warm) places like the kitchen. The heat increases their metabolic rate to an even higher degree, which makes them sweat a lot.

A very characteristic and specific picture of hyperthyroidism is the loss of weight combined with a huge appetite. The cells burn the glucose so fast, that there’s barely any time left for storing excess glucose. Excess glucose is stored through glycogen in the liver or muscles. A person with hyperthyroidism eats so much and yet loses weight.

The person becomes very hyperactive – has more energy than is normal and is excessively active; nervous – frightened or worried; anxious – apprehensive and fearful, characterized by physical symptoms such as palpitations, sweating, and feelings of stress, very irritable and then very moody at times.

The combined symptoms of change in mood, loss of weight and huge appetite have fooled many people into believing that those with hyperthyroidism are on hard drugs.

Foods that interfere with the thyroid glands, and hyperthyroidism

The enlargement occurs when the thyroid gland is unable to synthesize the thyroid hormone. Goitrogens make it difficult for the thyroid to produce this hormone.

Goitrogens exist in some drugs and foods. Most of the foods we eat like spinach, sukuma wiki, sweet potatoes, cassava and millet, and cruciferous vegetables like broccoli, cauliflower, cabbage and brussels sprouts contain a lot of goitrogens. People with hyperthyroidism should try not to eat these foods raw, instead heat the foods before eating to reduce their goitrogenic effect.

Brussels sprouts look like tiny cabbages, imagine a cabbage that’s so small that you can toss it all into your mouth.

When you notice changes in your mood, or someone else’s, make an effort to see a doctor. These changes may relate to symptoms of diseases that can be cured or managed, but only after consulting a doctor.

Fatigue, tired, depressed, and increased weight; it could be an under-active thyroid

When one’s thyroid gland gets underactive, it produces insufficient T3 and T4 hormones in the body, a condition called hypothyroidism.

This person’s cells will work at a slow rate, a process called reduced metabolism. Metabolism is the process through which your body burns energy, creates heat, digests food, transports nutrients throughout the body; it’s the cell process that keeps you alive. Hypothyroidism slows the cell’s effort to carry out these functions.

A person suffering from hypothyroidism becomes increasingly sensitive to the cold (cells not generating enough heat), the person might gain some weight, have a puffy face, dry skin, be constipated and acquire a hoarse voice. Remember the thyroid gland is on the base of your neck.

Hypothyroidism affects your mood in a very negative way. The patient might complain of being fatigued and tired. These people seem to drag their feet during routine activities, they have difficulty in sleeping and in concentrating. Hypothyroidism has also been linked to depression.

When you notice a change in someone’s character, from being active and full of life to being fatigued and slow, bordering depression, encourage the person to consult a doctor. We often assume that people are weighed down by the troubles of life, sometimes they are just sick and need medical attention.

If a person is diagnosed with hypothyroidism, they should consider having food that’s rich in iodine. Iodine is very important in the production of the T3 and T4 hormones that regulate the speed of cells’ metabolism.

When the thyroid cannot manage to produce enough T3 and T4 hormones, it grows bigger, in an effort to produce more of these hormones. That’s why people suffering from hypothyroidism will sometimes have a goitre, the swelling on the neck.

A diet which is low in iodine is the most common cause of hypothyroidism. Iodine is a mineral that originally comes from the ocean and can be found in larger deposits in plants and fish from the ocean, or in foods from oceanic soils and environments.

Although our soils should have iodine, they have been eroded and lost their nutrients. Iodine in the soil is barely transferred to the plants and animals that feed off our soils.

Iodine can be found naturally in ocean-fish such as sailfish, red snapper, dorado, cod, tuna and seafood, also in seaweed and sea vegetables. This fish is available in Kenya, from the Indian Ocean.

Dairy products such as milk and yoghurt are a good source of iodine, some of them are enriched with iodine.

Salt is now commonly iodized in order to reduce the incidence of hypothyroidism. However we cannot advise increasing your intake of iodized salt, instead have more fish and yoghurt.

Fruits such as bananas and strawberries also provide iodine.

Higher exposure to certain chemicals in processed foods reduce the rate of iodine absorption by the body especially the compound called bromine found in lots of industrial-produced packaged food products. Try and eat more foods that are prepared at home.

How an overactive thyroid can risk personal relationships

Charlie seemed to be having a bad month. He had just returned from work and felt like he had made a fool of himself while presenting the company’s end-year financials.

It was unbecoming of him, he knew himself to be a confident man, well-spoken and intelligent. But of late he was constantly nervous! While presenting, his hands trembled as he held the printed report, and he could not concentrate. It was a bad month, he kept reminding himself.

His wife, Naomi, had noticed this change. Charlie had not been himself over the past few months. He constantly complained of being tired, and just wanted to sleep right after eating. Was he seeing another woman, she wondered.

This was not the same Charlie she married some few years ago. He used to be well built and a bit muscular, but he had lost weight dramatically, and yet he was still eating like a whale. He hated to cuddle at night, and complained of being too hot, even when it was freezing at night. It sounded like an excuse for not cuddling.

What was most painful for her, was that any conversation they had quickly turn into an argument. Charlie had become easily irritable. Had he started taking drugs also, she wondered. Was she losing her marriage! What would her family and friends think!

Many things went through Naomi´s mind as she reviewed her company’s brand strategy the following day. Should she go to the popular psychiatrist she saw on TV who claimed to solve all kinds of problems or visit the medicine man in her hometown. She was desperate and needed to save her marriage.

As part of their normal yearly activities, Charles and Naomi went for a routine medical check-up.

The doctor called them after their lab results. Charlie’s thyroid hormones were elevated, his hormones were overactive, and in effect, his cells’ metabolism was extremely high! The cells were burning anything he consumed rapidly, generating high amounts of heat (which made him hot) and affecting his nervous system.

Foods to eat (or not to eat); hyperthyroidism

Charlie’s thyroid gland had become too active. The thyroid gland is controlled by the pituitary and adrenal glands, the nutrients involved in hormone production and regulation for all three glands are particularly important for thyroid health.

Sometimes increased consumption of iodine can lead to hyperthyroidism. Most of the foods we enjoy have natural or inorganic iodine. Baked potatoes, salt, seafood, eggs, milk and other forms of dairy.

A person living with hyperthyroidism must plan their meals effectively to ensure they consume low amounts of iodine. Firstly there are foods he or she should try and avoid, foods that contain high levels of iodine. Iodized or sea salt (get non-iodised salt) and seafood.

Dairy products, that come packaged also have high levels of iodine because some companies use iodophor cleaners for milk cans and the cow’s teats. Read the food package to be safe.

Most of the African governments recommend fortification of salt of up-to 2.5 times higher than what is recommended by the World Health Organization.

The recommended dietary allowance for iodine is 150 μg/day for adults and 70-120 μg/day for children. Pregnant and lactating mothers are allowed to have as high as 200 μg/day because of the development of the child’s brain. One teaspoon of salt contains an average of 400 μg.

Some people consume as much as a teaspoon of salt per day, almost 3 times the recommended daily intake of iodine. It’s in the bacon they have for breakfast, the salt they add to the eggs, the sausage, then again the potatoes, meat and vegetables they eat for lunch, and dinner!

Watch the amount of iodine you consume in a day, eliminating your iodised intake from salt and cured meats like bacon, sausage and hams could reduce the symptoms of the overactive thyroid. Also take note of canned juices or foods that use red, brown or red-orange dyes, these contain iodine.

There are still many yummy options of food to have. Fresh-water fish like tilapia, catfish, nile perch, dorobela (Turkana), dodosi (Digo) would be a good replacement for seafood.

Have a healthy diet, rich in Vitamin C and B complex (especially Vitamin B3 and B5) manganese, zinc and selenium. Fruits and vegetables, whole grains (and flour), egg whites and non-salted nuts are good for you. 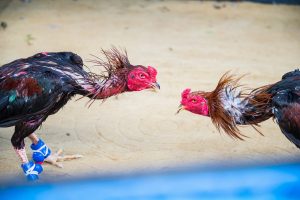 Potential energy turns to kinetic energy when you lose the temper 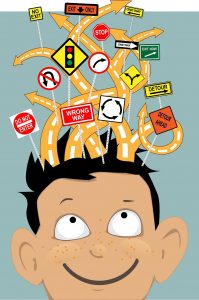 Understanding how your brain works 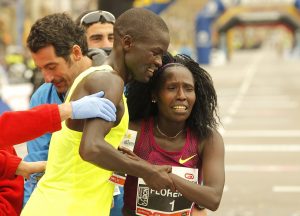 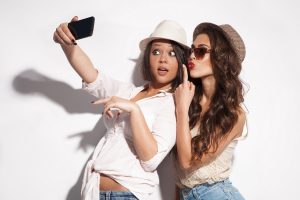 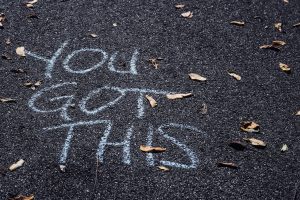