“African libido” is the sexual energy and drive that you can find among the African people. It’s an established truth that Africans are blessed physically and sexually. Examples of such natural physical blessing in African women are the curvy-body, wide hip, large “back-side” and sexy figure-8 shape; for African men, they have a muscular body, sexy physique and a rather large penis.

The African natural physical blessings are what made African the sexiest race on earth. Also, sexually, Africans have the highest sexual energy, sex drive and libido in the world. No wonder the sex-demand for a black man or black woman anywhere in the world is second to none! Scientifically, African’s sexuality will not be possible without the role of genetics and environmental factors.

GENE OF A BLACK MAN! 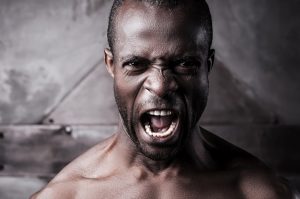 Even though most African men have a stronger sexual desire than their women, overall Africans do enjoy blissful and adventurous sex life. The adventurous sex life of an Africa man tends to increase the likelihood of polygamy in an African community. In Africa, the religious, moral and cultural believes poses a restraint to African sexuality by antagonizing extramarital sex because it’s against the religious law and moral standard of Africa.

However, these laws only succeeded in making Africa man/woman a hypocrite. Here is an example of what a relationship looks like in Africa. ‘One man, at least one mistress and many girlfriends’; ‘one woman, a steady partner, and several transient lovers’; ‘older man, a wife and his student girlfriends’; ‘old woman, one husband and her gigolo’! How can these co-exist with religion and cultural values in the world’s most religious continent?

EFFECTS OF AN ENVIRONMENTAL FACTOR ON AFRICAN LIBIDO

The impacts of environmental factors on African libido can’t be under-emphasized. Environmental factors like vegetation, foods, and culture in Africa geographical location helps in shaping true African sexuality. The vegetation in the Africa region exposes its inhabitant to many natural herbs that have aphrodisiac properties, prevent erectile dysfunction, improves sexual health and maintains the overall wellbeing of an African man. Similarly, the cultural heritage of African food plays a vital role in an Africa man’s sex life.

From the West- Africa to the Eastern part, down to the coast of the Southern part of Africa, African cuisine is rich in fresh vegetables, fruits, fish& different kinds of seafood and a good source of animal proteins. African dishes are rich in multivitamins, omega-3-fatty, zinc, manganese, magnesium and potassium etc.  These nutrients help to improve brain metabolism, build healthy blood vessels and increases blood flow to the genitals, reduced the risk of cardiovascular diseases, increase libido and enhance erection with an overall effect of a better sex life and general well-being.